The April 19, 2021 Budget was relatively sparse in terms of substantive tax changes, but one of the major items in the Budget documents is the extension of the Canada Emergency Wage Subsidy (“CEWS”) and the Canada Emergency Rent Subsidy (“CERS”) program, and the introduction of a new wage subsidy program, the Canada Recovery Hiring Program (“CRHP”). This blog will focus on these COVID business support programs. Read our Budget blog post for our take on the rest of the budget.

The Budget extended the CEWS and CERS program from its current end date of June 5, 2021 to September 25, 2021, with the potential legislative room to further extend the programs through Regulations until November 20, 2021 should the COVID situation warrant. This proposal made no substantive changes to the overall mechanics of the CEWS and CERS program.

The two tables below summarize the computation for the newly created claim periods for CEWS and CERS. As you can see, the subsidies under both programs begin phasing out starting in Claim Period 18. 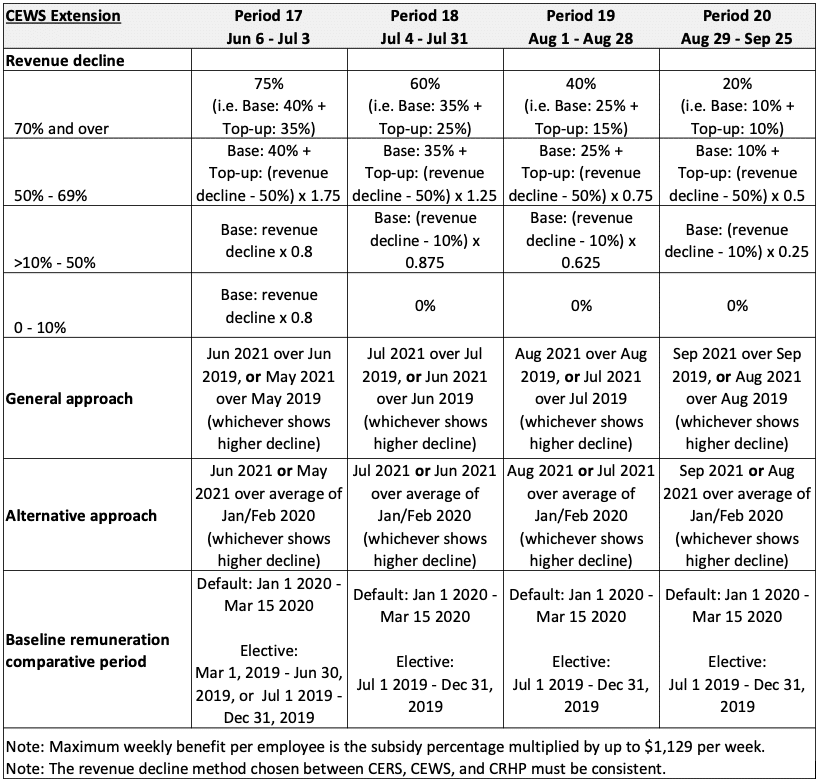 For companies that are listed or traded on a stock exchange or other public market, the Budget proposes a clawback of CEWS claimed for Periods 17 and subsequent periods if the compensation of the company’s top five executives is higher in the 2021 calendar year compared to the 2019 calendar year. The amount of the clawback is equal to this excess.

The actual amount of CEWS recovered under this formula will be miniscule under this new rule, and it is clearly to bolster the public perception that Government is cracking down on so-called ‘misuse’ of CEWS funds.

This clawback does not apply to private companies.

The asset sale continuity rule for determining decline of qualifying revenue is amended to apply the deemed satisfaction of the business number requirement to CERS, effective back to the beginning of the CERS program.

The Budget proposed a new CHRP to encourage private corporations, sole proprietors, non-profit organizations, and registered charities to expand their workforce after June 6, 2021. A for-profit corporation would be eligible for the CRHP only if it is a Canadian-controlled private corporation. A partnership also qualifies but only if 50% or more of the fair market value of the interest in the partnerships are held by entities qualifying for CRHP.

Also, to qualify, the CRHP claimant must meet an all-or-nothing revenue decline test:

The revenue decline percentage itself is calculated under the same mechanics of the CEWS and CERS program.

If the claimant qualifies, the calculation of CRHP is relatively simple. It is calculated as a percentage of the excess of its “total current period remuneration” over its “total base period remuneration”. The total base period remuneration is based on wages paid during March 14, 2021 to April 10, 2021. The CRHP will pay out as a subsidy of 50% of this total incremental increase in wages, subject to certain limits in the calculations. Mostly, it is rewarding organizations that have increase the number of their active employees after June 6, 2021 as compared to their March 14 to April 10, 2021 period.

Also, a claimant would be permitted to claim either the CRHP or the CEWS for a particular Claim Period, but not both. Therefore, starting Claim Period 17, an employer should calculate its entitlement under both CRHP and CEWS, and claim under the program that provides the higher subsidy amount. The table below summarizes the calculations for the CRHP: 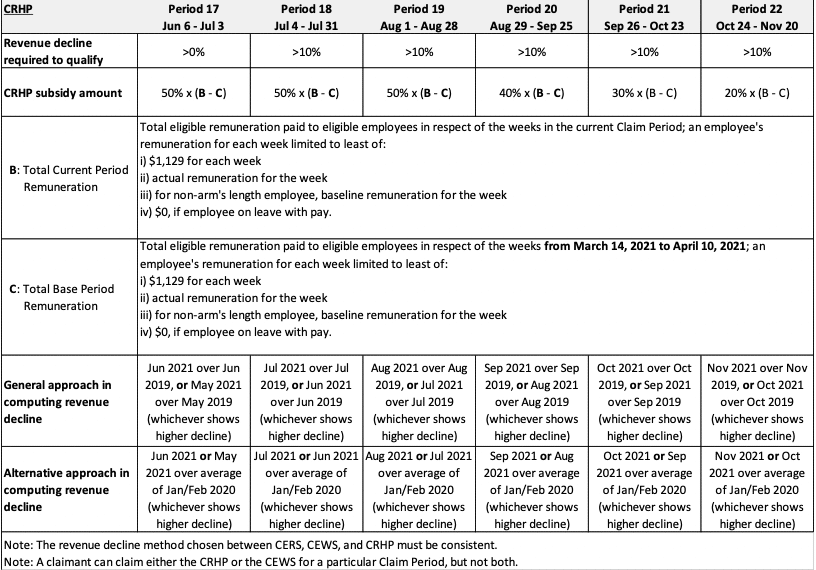 The proposed rules include an anti-avoidance rule whereby a claimant can be penalized an extra 25% if the claimant is found to have entered into a transaction, event, series, took an action, or failed to take an action that has the effect of increasing the excess of Total Current Period Remuneration over Total Base Period Remuneration, and one of the main purposes of doing so was to increase CRHP entitlement. While this is similar to the CEWS and CERS anti-avoidance rule, the operation of this rule appears to be awkward. A business increases current period remuneration by hiring more employees or paying its employees more money, which is what the CRHP is incentivizing employers to do. Yet, doing so with a main purpose of gaining CRHP triggers the anti-avoidance rule? Seems self-defeating. Hopefully, Finance or the CRA will clarify the operation of this rule before the CRHP program starts.