Today, on March 25, 2020, Canada enacted Bill C-13 An Act respecting certain measures in response to COVID-19 (the “Bill”). This Bill contained many of the measures that were previously announced in the March 18 COVID-19 Economic Response Plan. You can read our March 18 blog for our views on the previous announcement.

The Bill contains many aspects aimed at helping Canadians overcome the COVID-19 situation. As we are tax geeks, we are going to limit and focus our comments on the income tax measures and the Emergency Response Benefit contained in this Bill.

GST credits are normally paid quarterly every 12-month cycle: July, October, January, and April, and they are calculated based on the income reported on the personal tax return filed for the year prior to the start of the cycle. For example, the 2018 personal tax return calculates an individual’s entitlement to GST credits payable on July 2019, October 2019, January 2020, and April 2020.

Bill C-13 provides an additional one-time GST credit for individuals entitled to the GST credits for the normal July 2019 to April 2020 cycle (which is based on 2018 income tax returns filed). This one-time credit will be paid in May 2020 – but the Bill gives the Government the power to accelerate this, and the maximum entitlement will be as follows:

This additional Canada Child Benefit amount is available even at fairly high income levels. For example, the full $300 amount is available to a family that earned $195,460 in 2018 with one child under age six. This $300 payment decreases beyond that income level and becomes $0 to the extent that family had income of $307,990 in 2018.

Every registered retirement income fund (“RRIF”) has a calculated “minimum amount” that must be paid to a RRIF owner annually. While investment earnings in a RRIF are tax-deferred, amounts paid out of a RRIF are taxable on receipt. The Bill will reduce the 2020 minimum amount for a RRIF by 25%, so that seniors may avoid unnecessary liquidation and withdrawals while stock market conditions are unfavourable and allow for a deferral of tax on funds not needed to meet living expenses.

Note that the exemption from withholding tax on RRIF withdrawals up to the minimum amount will continue to be based on the unreduced minimum amount.

An interesting historical note: the Canadian government introduced a similar 25% reduction in RRIF minimum withdrawals for 2008 due to the market crash that year. The legislation in the Bill is a direct copy of the 2008 legislation.

On March 18, 2020 the government announced a temporary three-month wage subsidy for eligible employers equal to 10% of the remuneration paid during the three month future period, to a maximum of $1,375 per employee (equivalent to $55,000 of annual salary with $13,750 gross salary paid over these three months) and $25,000 per employer. The Bill contains further details on this program.

“Eligible employers” are now defined to include any person or partnership that employs at least one individual in Canada, has a CRA payroll number on March 18, 2020, and is any one of the following:

For the period beginning on March 18, 2020 and ending on June 19, 2020, the eligible employer will need to manually calculate the subsidy as a reduction to the required payroll income tax remittance. Here is an example posted on a CRA webpage:

The amount of the subsidy and the $25,000 per employer maximum is actually not contained in the Bill. We expect they will be contained in Income Tax Regulations which have not yet been released to the public to our knowledge (presumably so that the Government may adjust according to the changes in circumstances without calling back Parliament). However, given the repeated pronouncements from the government, we expect these amounts will not differ from what has been announced.

While the subsidy is a nice benefit to employers, it may not actually be significant enough to impact decision making when an employer is making the hard decision whether to lay-off employees:

There are some interesting potential planning implications to this subsidy. The $25,000 maximum limit per employer is not shared amongst related or associated group of companies. Therefore, an individual can control multiple corporations which employ employees, and each of these corporations would be entitled to their own $25,000 limit (even if they all hire the same employee). For corporate partnership structures, it appears that each of the partnerships and the CCPC corporate partners will be entitled to a separate $25,000 maximum limit as long as each of them had a CRA payroll number as of March 18, 2020.

In multiple entity situations, it is important that each associated entity is allocated at least $0.01 of the $500,000 small business limit when it files its 2019 corporate tax return (T2Sch23) as there is an explicit requirement in the Bill that the CCPC be allocated more than $nil. If 2019 corporate tax returns have already been filed, it may be necessary to amend the returns to make this necessary nominal allocation. Another consideration is that if the employer has or is part of an associated group that has close to $15 million of taxable capital in 2019, it will be worthwhile to examine if it is possible to report less than $15 million taxable capital. The $25,000 maximum per employer limit is an all-or-nothing test based on the $15 million threshold.

The previously announced programs of Emergency Care Benefit and Emergency Support Benefit have been combined into one new plan, the “Emergency Response Benefit”.

In order to qualify, an individual must be a “worker”, which is defined as a person who is at least 15 years old, who is a resident of Canada, and for 2019 or in the 12-month period preceding the application date, has an income level of at least $5,000. A worker may apply for income support payments for any four-week period beginning on March 15, 2020 and ending on October 3, 2020.

In order to be eligible to receive the amounts, the worker must have ceased to work for reasons relating to COVID-19 for at least 14 consecutive days within the four-week period in respect of when they apply for the payment (a worker does not cease to work if they voluntary quit their employment, and therefore, if an individual quits their job, they will not be eligible for this benefit). We note that the government webpage stated that a worker who still has employment but is not being paid because their employer asked them not to come to work (due to insufficient business) will qualify as “ceased to work”. During that time period, the worker must not have received any income from employment (even though the worker can still technically be employed), Employment Insurance benefits, or allowances, money, or other benefits paid because of pregnancy or adoption. The legislation indicates that the amount of the income support will be set by regulation. The government indicates that this amount is currently set to be $2,000 a month ($500 per week). The Bill provides that a worker must apply for any four-week period, during the time period of March 15, 2020 to October 3, 2020 (meaning the worker would need to reapply every four weeks). The maximum number of weeks a worker can receive Emergency Response Benefit is 16 weeks – but the Bill provides the government power to change this in the future.

The government webpage noted above views this amount to be a taxable benefit under the Act. We believe this is likely the correct interpretation since subparagraph 56(1)(r)(iv) says government financial assistance similar to EI benefits is included in income. However, an overlooked fall out from this is that recipients of this Emergency Response Benefit may have tax owing in April 2021 since there does not appear to be any upfront tax withholding on the Emergency Response Benefit payments. We find this a little odd since typical income support assistance payments are subject to withholding, so that the recipients do not have to save for tax later on. This does not appear to be the case here. If the government does not amend the withholding regulations to address this, we may see cash crunch problems down the road for these recipients.

We thought the age eligibility for this benefit being 15 years old was surprisingly young. Does a part-time 15-year-old really need this emergency support money, when there are so many competing and expensive objectives? Also, “ceasing to work for reasons relating to COVID-19” is very broad wording and we are afraid this may lead to abuse.

What is not in the Bill: Income Tax Filing and Tax Payment Extensions

The government has announced a number of important extensions to tax filing and payment due dates. The CRA has prepared a table summarizing these: 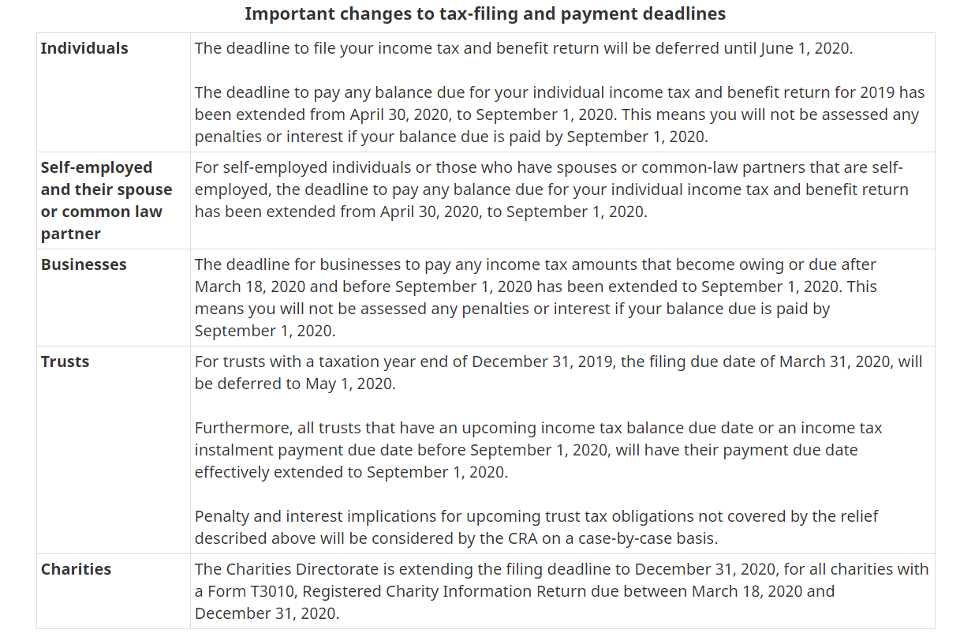 No new or amended legislation to the Income Tax Act was included in the Bill  relating to this extension. We presume this is because the Minister already has the power under subsections 220(3) and (3.1) of the Income Tax Act to extend filing due dates and waive penalties and interests.

There are, however, still a lot of uncertainties around this. For example:

Since the federal Emergency Response Benefit is not going to be available until some time in April, the province of Alberta has introduced an Emergency Isolation Support program. Eligible working Albertans can receive a one-time emergency isolation support payment of $1,146 if they are required to self-isolate or are the sole caregiver of someone in self-isolation and they have no other source of pay or compensation. Likely because this is meant for a stop-gap measure, the eligibility criteria is fairly narrow – see below.

You are eligible for the emergency isolation support program if you:

You are not eligible for this program if you:

[1] Thanks to Cory Litzenberger of CGL Strategic Business & Tax Advisors in Red Deer, AB for pointing this out on his LinkedIn account as follows: In order to get $1,375 relief, this means businesses would need to pay $13,750 in wages. If a business pays $13,750 in gross wages, that also means they will have already paid the employer portion of CPP and EI totalling $1,026.03.

[2] A T1135 is due on an entity’s “filing-due date”. We imagine this should also be delayed if the government is implementing the late filing by extending the “filing due date” for individuals’ and trusts’ income tax returns. However, if this is implemented by waiving of interest and penalties for late filing of the income tax return, the filing due date of these information returns would technically remain the same.