Canada Safeway Ltd. v. Alberta1 is one of the early court decisions2 examining the general anti-avoidance rule (“GAAR”) under the Alberta Corporate Tax Act.3  The issue was whether tax benefits resulting from a plan referred to as the “Ontario shuffle” should be denied under the GAAR to two taxpayers in the corporate group.  Both taxpayers were successful in this case.

The “Ontario shuffle” was tax-neutral at the federal level, but reduced Alberta tax by effectively shifting income from Alberta to Ontario where it was not taxable.  The plan was implemented as follows.  Canada Safeway Ltd. (“CSL”), the entity that carried on Safeway’s Canadian business, became a subsidiary of Canada Safeway Holdings Ltd. (“CSHL”).  Over a one-month period, CSL distributed $600 million of dividends to CSHL and borrowed amounts totaling $600 million from CSHL over the same period.  The borrowings were used for the purpose of earning income from CSL’s business, and so the parties agreed the interest paid on the borrowings would be deductible for CSL, leaving aside the GAAR.4

As part of the plan, CSHL incorporated Safeway Ontario Finance Corporation (“SOFC”) in the British Virgin Islands with a permanent establishment in Ontario.  CHSL assigned the $600 million of borrowings to SOFC, which then became the creditor and therefore the recipient of the related interest income.  However, under the Corporations Tax Act (Ontario) in force at the time, SOFC was apparently not taxable in Ontario on the interest income because it was incorporated outside Canada.  Further, as SOFC earned interest income, it paid dividends to CHSL, which were deductible to CSHL.  Most of the cash from such dividends was then lent to CSL to finance its business. 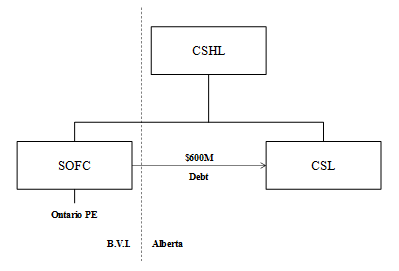 The Alberta Minister of Finance imposed GAAR reassessments of approximately $7 million per year on CSL on the basis that the plan resulted in an abuse of paragraph 20(1)(c), being the provision that allows for interest deductibility.  The Minister, citing the Supreme Court of Canada decision in Lipson v. the Queen,6 argued an abuse of paragraph 20(1)(c) occurred because overall result of the transactions was not in accordance with the purpose of that provision, which is to encourage the “accumulation of capital with the potential to produce income.”

The Court, however, disagreed with the position that the overall result of the transactions must be in accordance with the legislative purpose.  According to Lipson, the overall result is relevant only to the extent that it establishes whether the transaction frustrates the purpose of the relevant statutory provisions.7  Lipson was another case that considered whether paragraph 20(1)(c) was abused.  In that case, the taxpayer conceded that the overall purpose or result of the transactions was to minimize tax.  The taxpayer’s appeal in Lipson was denied, but on other grounds; the taxpayer’s position was generally accepted with respect to the GAAR analysis of paragraph 20(1)(c).

The Minister also objected to the fact that the plan took advantage of an existing “loophole” in another province’s legislation.  In effect, the Minister was applying the Alberta GAAR to CSL based on the tax treatment of SOFC under Ontario legislation.  The Court found this approach untenable, stating that where a tax deduction does not frustrate the purpose of Alberta legislation, the deduction cannot be denied under Alberta GAAR simply because a related taxpayer is not subject to tax on the same amount in Ontario.  Accordingly, the GAAR reassessment against CSL was reversed by the Court.

The Minister also reassessed CSHL approximately $17 million, advancing two GAAR arguments.  First, the section 112 deduction – which generally allows inter-corporate dividends to be received tax-free –should be denied on the dividends received from SOFC.  Second, an interest income inclusion was avoided when CSHL assigned the borrowings to SOFC.  The Minister was unsuccessful on both arguments.

The Minister’s assessment against CSHL recharacterized the transactions by assuming CSL would have borrowed $600 million from CSHL directly without incorporating SOFC into the structure.  While a GAAR analysis may require the actual transactions to be compared to the status quo to determine whether an avoidance transaction occurred, the Court held that the entire series of transactions must be compared to the status quo (i.e., the structure existing before implementation of the transactions).  In this case, the Minister was comparing the status quo to part of the series of transactions that was completed ignoring the transfer of the borrowings to SOFC.  The Court also had difficulty with the fact that “the Minister’s submission, taken to its logical conclusion, is that a taxpayer obtains a tax benefit which may be an avoidance transaction whenever a taxpayer disposes of an income-earning asset.”

The Court’s decision regarding the CSHL reassessment follows a well-established line of Supreme Court of Canada jurisprudence on GAAR and interest deductibility.  This case also may have interesting ramifications if the reasoning is adopted in the international context, for example where double-dip structures8 are employed as well as allegations of treaty abuse in circumstances of double non-taxation,9 given the Court’s comment that a deduction should not be denied in one jurisdiction (Alberta) merely because of lack of tax in the other jurisdiction where the corresponding income is earned (Ontario).

Despite the taxpayers’ success in this case, the “Ontario shuffle” is no longer a viable plan due to the amendments to the Ontario legislation.  However, if the Court’s reasoning is followed, it may provide useful arguments for appealing GAAR reassessments in certain cross-border or international situations.

4. The borrowings were used to repay commercial paper, the proceeds of which had been used to earn income from CSL’s business.  As such, interest paid on the borrowings was deductible pursuant to subsection 20(3) and paragraph 20(1)(c) of the Income Tax Act (Canada), R.S.C. 1985, c. 1 (5th Supplement) (the “Federal Act”), such provisions being incorporated by reference into the ACTA.  All statutory references are to the Federal Act as incorporated into the ACTA.

9. So-called double non-taxation results when, for example, a treaty exemption is obtained by in the source state in respect of income that would not be taxed in the residence state.  Some tax administrators and commentators believe such situations could constitute an abuse of a treaty (and perhaps subject to domestic anti-avoidance legislation) or that treaty benefits should generally be denied in such situations.