The grass is getting greener on the other side of the border: Taking your business southward is a no-brainer

At the end of 2016, I published a short article aimed at Canadian businesses and entrepreneurs who are considering expanding into the US. In that article, I summarized the current US tax landscape and highlighted the potential impacts of then President-elect Trump’s tax reform plan. At that time, it was clear that the United States was moving toward becoming a friendlier place for entrepreneurs and companies to expand their footprint. But here’s the thing: it seems like our Canadian government leaders either didn’t care or weren’t paying attention, and are now busy defending their controversial and damaging tax changes on private businesses (see our firm’s efforts in engaging the Canadian government on these proposals here).

The tax reform plan released September 27, 2017, known as the Unified Framework for Fixing Our Broken Tax Code (Unified Framework), is essentially an evolution of President Trump’s prior tax reform proposals. While most of the details have been left for Congress to figure out, it gives us the latest thinking on where US tax reform is likely to go. Preliminary revenue estimates put the tax impact at roughly $5.8 trillion of tax cuts and $3.6 trillion of tax base broadening provisions, to result in a net tax cut of $2.2 trillion.

The chart below summarizes some of the critical elements of the Canadian tax system versus the US tax system under the Unified Framework. 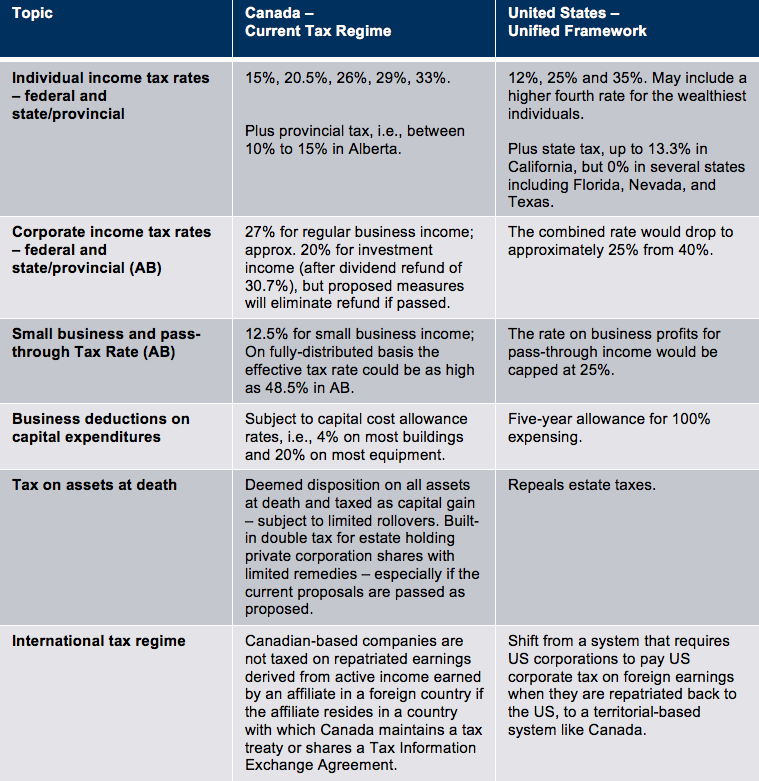 Below are highlights of some of the significant proposals in the Unified Framework that are very beneficial for entrepreneurs and businesses:

1. Slashing the US federal corporate tax rate to 20%

On the other hand, Canadian taxes on small and mid-sized business have increased because some provinces, such as Alberta, have recently increased their provincial corporate tax rate. As a result, an Alberta-based business now subject to a combined corporate tax rate of 27% may be handcuffed against their competitors in the United States.

2. Capping the maximum tax rate for small business at 25%

The Unified Framework limits the maximum tax rate to 25% on pass-through businesses such as sole proprietorships, partnerships, and S corporations. Businesses organized in this way don’t pay income tax themselves, but pass their income through to their owners, who are subject to tax at their individual rates. Currently, individuals in the US face a top federal rate of 39.6%. As such, those US individual business owners would enjoy major tax relief.

On the other hand, although Canada has a low small business corporate tax rate (12.5% in Alberta), the integrated tax rate once the income is paid out to the owner is up to 48.5%, resulting in 94% more income tax compared to a US business owner earning pass-through business income under the United Framework. To make matters worse, the Canadian private business proposal will require many business owners to incur additional compliance costs to justify “reasonableness” of dividends paid to certain shareholders (including reasonableness of a capital gain upon an eventual sale or death). On corporately-earned investment income, under the proposals, entrepreneurs in Alberta will endure a potential combined corporate and personal tax burden of 71% on investment income and 56% on capital gains.

Currently, US tax law already allows companies to recover the costs of capital investments used in a business, such as equipment, over a number of years through depreciation deductions. The Unified Framework accelerates the deduction by allowing businesses to immediately write off the cost of depreciable assets, excluding buildings and structures, in the same year that they make the purchase. The Unified Framework provides that the tax break would only be available for five years. In contrast, no comparable accelerated depreciation deduction scheme exists under Canadian tax law generally.

The Unified Framework is a comprehensive plan that will, if enacted into law, provide significant positive momentum for the US economy because it simplifies and streamlines the US tax system, promotes business investment, and rewards entrepreneurs. Unfortunately, in Canada the tax proposals will increase tax and administrative burdens on entrepreneurs and as a result, likely risk losing human and financial capital. If President Trump and the Republican party leaders in Congress can actually move this forward, it should create exciting times for businesses and entrepreneurs in the United States.

Taking your ideas and business southward is a no-brainer if Canada doesn’t change course.