An update to the small business deduction rules, and some much-needed flowcharts

It has been more than half a year since the Department of Finance announced proposed amendments to the small business deduction (SBD) rules in section 125 of the Income Tax Act (Act) as part of the 2016 Federal Budget. The Canadian tax community has just started to digest the complexity and reach of these amendments. The draft legislation has only passed First Reading in Parliament (as Bill C-29), but in all likelihood, it will eventually be enacted in its current form since Finance has already made a round of revisions to the draft legislation on October 21, 2016.

At a high level, the new section 125 will ‘carve-out’ three types of income of a Canadian-controlled private corporation (CCPC) from being eligible for the SBD:

Generally speaking, income caught by the Clause A or B carve-outs are prima facie not entitled to the SBD, unless there is a positive assignment of business limit or ‘specified partnership business limit’ from another entity to the CCPC.

One of the most important revisions Finance made to the draft legislation on October 21, 2016, was to introduce an exception to the rules for most transactions between associated corporations. This addition is now contained in subsection 125(10) of the draft legislation. This welcome change is a direct response to the submission that The Joint Committee on Taxation of The Canadian Bar Association and Chartered Professional Accountants of Canada made to the Department of Finance on August 25, 2016. The previous version of the rules extended to transactions between associated corporations, which not only created certain technical problems but was also unnecessary from a policy perspective since associated corporations already have to share the $500,000 small business limit per subsection 125(3).

The second major revision that Finance made to the draft legislation on October 21, 2016, was to add various rules to prevent taxpayers from circumventing the various carve-outs by structuring back-to-back arrangements. Under the previous version of the draft legislation, it was possible to skirt the specified partnership income (SPI) or specified corporate income (SCI) rules by inserting an intermediary corporation or partnership between the true transacting parties. For example, if A Co’s main source of income is from providing goods to B Co, a corporation in which a non-arm’s length person of A Co holds an interest, none of that income of A Co would be entitled to the SBD unless B Co is willing to positively assign a portion of its $500,000 business limit to A Co. However, prior to Finance’s recent changes to the draft legislation, A Co may have been able to avoid these rules by inserting a non-arm’s length intermediary corporation, C Co, in between, whereby it provides the goods to C Co who in turn provides them to B Co. B Co would not assign its business limit to C Co since C Co would have little or no profit from its involvement; at the same time, C Co would assign its business limit (which it does not need) to A Co. In effect, by undertaking this arrangement, access to the SBD is multiplied from $500,000 to potentially $1,000,000. Such back-to-back arrangement is no longer permitted under the current version of the draft legislation.

We have already described how broad these amendments are in a previous blog, but it appears that everywhere we look new situations would arise where one would never have contemplated these carve-outs to apply but they actually do. For instance, in a number of Canadian provinces, farmers and fishermen are required to sell all of their produce to a co-op in which they own a very tiny interest of. Since a co-op is a private corporation (subsection 136(1) deems a co-op not to be a private corporation except for the purposes of applying various sections including section 125), farmers and fishermen who have to sell to these co-ops would not be able to claim the SBD starting taxation years that begin after March 21, 2016. Similarly, a CCPC supplying goods to a Canadian subsidiary of a US listed public company could also potentially fall afoul of these rules if one of the shareholders of the CCPC (or a non-arm’s length person) holds a stock in the listed company, since the Canadian subsidiary is actually a ‘private corporation’ under the Act. Such results were likely not intended by Finance.

The complexity of the new SBD rules is unfortunate. While complexity is to be expected when it comes to tax law, it boggles the mind that rules such as the SBD, which are relied on by tens of thousands of mom-and-pop businesses, are becoming so inaccessible. In a paper our firm recently co-authored, we prepared two simplified flowcharts to help tax practitioners navigate the Clause A carve-out (SPI) and the Clause B carve-out (SCI). These flowcharts were first published by the Canadian Tax Foundation in its 2016 Conference Report, and they are reproduced here for our readers. 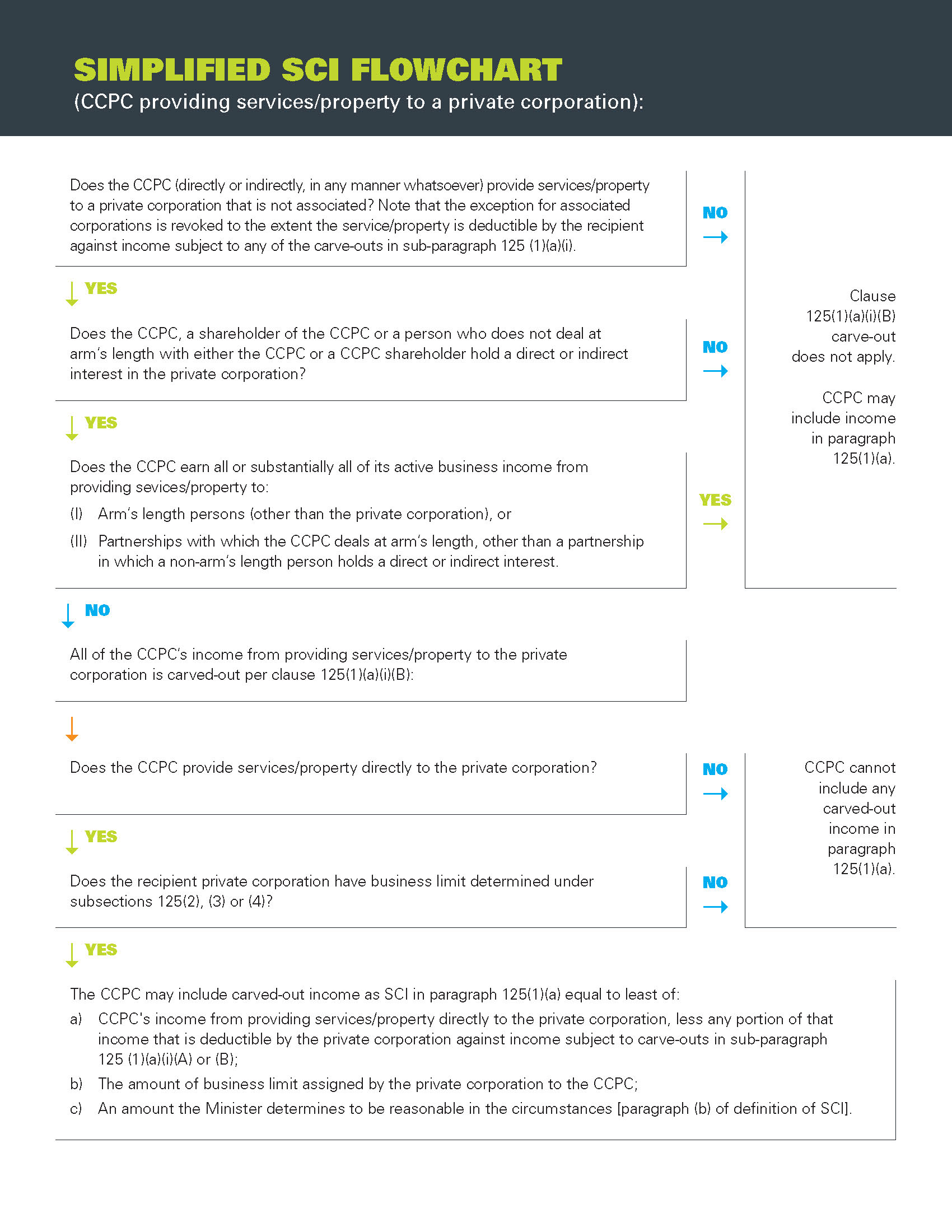 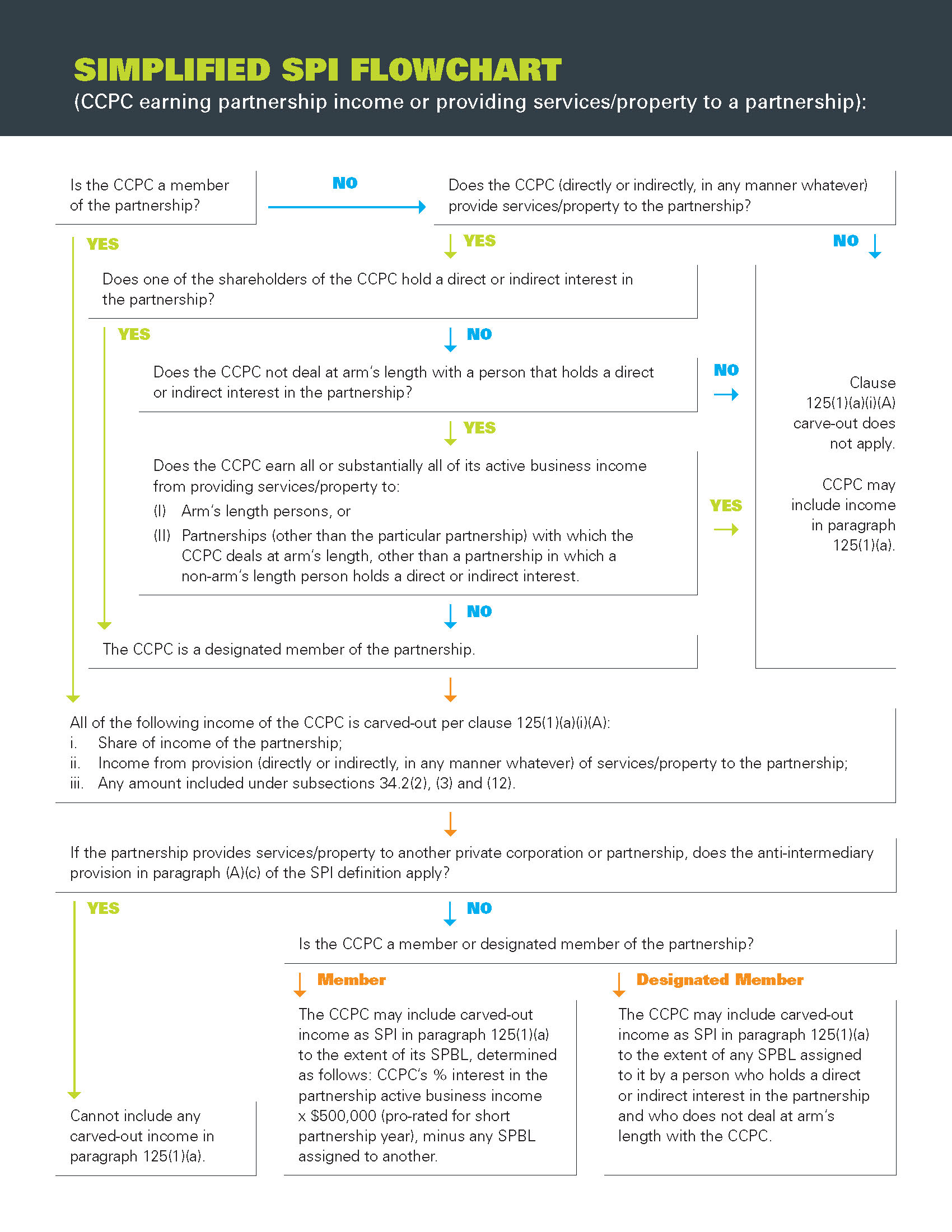